The first tennis competition of 2017 saw the start of the D&G Mini Red Tour.

The tour was created for children 8 years and under to play tennis on red size courts which is the equivalent of a badminton size court with the excellent Babolat sponge balls. Players will accumulate points for each event they play in with medals being awarded for the winners, runners-up, third place and consolation winners at each event with the overall point’s winner receiving at trophy at the end.

In the consolation event, Logan v Beth 10-4, Finlay v Mohamed 10-6 and in the final Finlay edge past Logan 10-3, in the main event we had two tight semi-finals, Oliver v Cameron 10-8, Euan v Daniel 10-8. In the final we had a surprised winner but very much deserved for all his efforts over the past 12 month Oliver v Euan 10-5 and in the Third place play-off Daniel v Cameron 10-5.

This leaves Oliver top of the leaderboard after the first even with Euan second and Daniel Third. In the girls event Erin sits top with Beth in Second. The next event is in Annan on Saturday 18th February, any child wanting to enter should contact Michael at tennis@dumfriessportsclub.co.uk 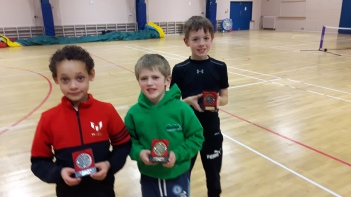