Seven of the regions kids took part in an 9 and under competition at Carlisle on Sunday. 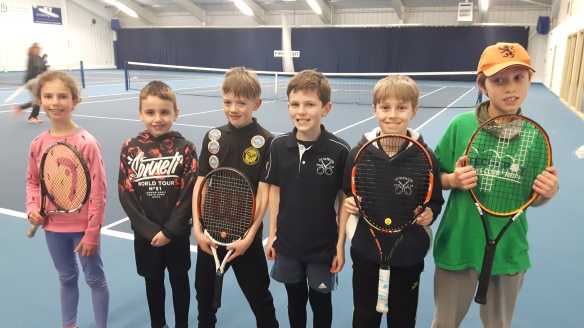 There were 14 kids in total with the format being 2 round robin groups of 7 players in each, then a play-off for each position.

The results will be loaded shortly and can be viewed here.  Results

All the kids played 7 matches between the indoor courts and the outdoor courts at Chatsworth Tennis Club in Carlisle. There was some great tennis on the day from all the kids and despite some kids not getting the results they wanted all kids showed some good early season form as they returned from the winter break. The top five places were secured by D&G kids with Fergus Reynolds-Lewis (Dumfries) edging a tight match against Daniel McKenna (Annan) 10-7. The 3rd and 4th place play-off was between Moffat duo of Ben Rogerson and Rose Brown with Ben just holding off Rose 10-9. In fifth place was Flynn Dalgliesh from Annan who played some of the most consistence tennis all day. The final two boys, Jacob and Kyle should be very happy with their days play also, they played some very good tennis in patches and will now look to gain more experience in the upcoming months. Many thanks to all the parents for their time and big thanks to Tracey Burrus for running a great event.