Dumfries Tennis Club hosted the 2018 Dumfries & Galloway Junior Confined Championship on Saturday 23rd June. The had 34 player from Dumfries TC, Beechgrove TC (Moffat), Dalbeattie TC, Gatehouse of Fleet TC, Annan Seaforth TC and St Mungo’s TC playing today as we completed 85 matches. We started at 10.30am with the 8s and under red and 10s and under green players and we finished with the 12 and under mixed final at 7pm. 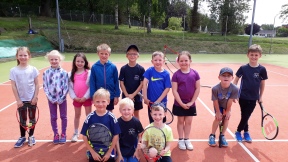 Great to see so many of D&G’s junior talent playing their best tennis on the big stage. Well done to all 34 kids. The next mini event is the D&G Red2Yellow Tour Green and Red event at Moffat on Saturday 30th June.