The final round of the D&G Mini Red Tour was completed today with 5 boys and 5 girls playing in the event. We has 5 from Dumfries TC, Jack Wearing, Dominik Czopek, Adam Hunter, Lucy Scade, Caitlin Topping and Abigail Warren with Erin McKenna and Joseph Wylie from Annan TC, Erin Charnock from Chatsworth TC and Samuel Donnelly from Dalbeattie TC.

There were 2 boys and 3 girls still in with a chance of securing the leaderboard title but it was going to be tight. 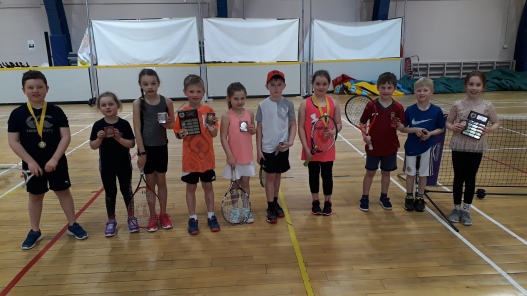 After a great number of round robin games it came down to 3 valuable matches. In the girls event Erin McKenna (Annan) last match against Caitlin Topping (Dumfries TC) proved to be decisive as Caitlin edge a tight match 10-8. This left the final girls match to decide who would take the gold and silver medal and confirm who would win the leaderboard event. The match started even as Erin Charnock (Chatsworth TC in Carlisle) who has won her previous 3 matches took on Lucy Scade (Dumfries TC) who had won 2 matches by 10-8 and lost 1 to Abigail Warren (Dumfries TC) 10-8. This went to the wire as both girls played some great tennis with the parents watching on. Erin had the first match point but Lucy held out and eventually went on to win 11-9 and with that results and the head to head win gave her the Gold medal and the Leaderboard title by a small margin of 20 points from Erin McKenna.

In the boys event the 2 favourites progressed to the last and final match with to set up then final shoot out to see who would be the 2019 leaderboard champions. Dominik Czopek (Dumfries TC) who recently won the Cumbrian Mini Red tour started the stronger against hitting partner Jack Wearing (Dumfries TC) and never looked back as his consistent play kept Jack chasing balls. Dominik went on to secure a 10-4 victory and with both the Gold medal and the 2019 Leaderboard giving Dumfries TC a double win in the boys and girls event.

Well done to all the kids with some very tight matches which on another day could have been so different.