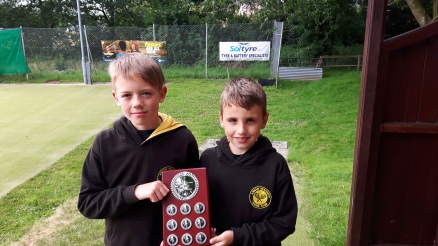 The D&G Junior leagues came to a close this weekend (2nd) with Moffat taking 3 of the four titles up for grabs with Annan claiming the final one on Sunday 2nd.

Rose Brown and Keeley Scott for the Beechgrove claimed the 10s & under girls title against their younger opponents from Dumfries. Both Erin McCluskey and Eve Crombie competed well in the first year in the leagues tennis but the Moffat duo were to good overall. Moffat also took the 12s & under boys and girls leagues. Brandon Smith and Ben Johnstone are pictured above receiving their league trophy. In the girls league Catie Palmer and Grace Johnson complete the season undefeated to claim the title from fellow Beechgrove players Tess Wilson and Amy McMillin and Heather & Alison Keal.

In the boys 10s & under this went to the wire as Annan completed a double header against Dumfries B and secured 2 wins to edge past Beechgrove on rubbers won, as both teams finished on 10 points each. This was a great achievement for the team who had to play all their matches away from home whilst their courts were being replaced. Special mention to Fergus Reynolds-Lewis from Dumfries who has completed  9 undefeated matches in 2 years of playing in the 10s and under leagues.

Well done to all the kids and thanks to all the parents and clubs for all their support throughout this season.