The newly resurrected Border Cups tournament is back in Dumfries this weekend. Last years events attracted a small entry but overall was well received with all the players and this year defending champion Kevin Breen is back in town to defend his title. This years event has attracted a strong field of players from both the Borders and D&G and promises to be another great event.

Play is expected to start at 10.30am on both days with the gents singles on Saturday and the gents doubles on Sunday and again the tournament is sponsored by Soltyre Ltd.

After a first week wash-out the mixed leagues eventually got underway. In the A league both Dumfries A and Dalbeattie A started their campaign with wins whilst Stewartry CSC recorded a walk-over win against Moffat. This week (21st) Dumfries A travel through to Castle Douglas to play Stewartry CSC whilst Dalbeattie A take a trip north to face Beechgrove.

In the B league Dumfries B have recorded wins away to Dalbeattie B (4-0) and followed this up with a home win against Stranraer (3-1). Elsewhere Stranraer used home advantage to ease past Kirkcudbright (3-1) with the later winning at home against Dalbeattie B (4-0).

Results and fixtures can be viewed using the link below;

Beechgrove Tennis Club (Moffat) are holding a tournament on Saturday 24th Aug to raise money for Save The Children.
At 12 noon they will start the girls’ and boys’ doubles competitions (players must have been born on or after  1st September 1999 and must be ranked no better than 8.1).
Then they aim to start the ladies’ and men’s doubles competitions at 1pm and will  try to fit in a mixed doubles competition too. (players must be ranked no better than 6.2).
There’s no fixed charge for entering the tournament, but a donation of £5 to the charity is suggested.
They are planning other fun events throughout the day too including a longest rally competition and a beat the coach session.
They will also be having a bake sale and a bbq.

The event is part of Save The Children’s national ‘Play Tennis, Have Fun, Save Lives’  fundraising campaign. Winners of our girls, boys, ladies, mens and mixed doubles competitions may be eligible to enter the Tennis Cup. In 2011, two of  their members, Euan McGlynn and Stuart McGregor, were lucky enough to be  invited to the Festival of Tennis at the National Tennis Centre in  Roehampton. They had a great time!
All players are welcome.

The South of Scotland Tennis Championships enjoyed a break in the recent bad weather at the end of the 8 day long tournament to complete all senior events on schedule last Sunday.

After a huge entry once again with an extra 6 players above last year’s 135yr old record, organisers had one eye on the weather forecasts all week. Any break in play would impact heavily on the schedules and cause a backlog difficult to recover from.

With a rainy start to Thursday morning stopping play for 5 hours the unprecedented decision was made to open up the 4 all-weather courts at Nunholm, Dumfries and also the two courts at Moffat academy to bring a total of 12 courts into use in the afternoon and enable the referee’s to end Thursdays play back on schedule. Tournament organisers would like to thank both Nunholm Tennis Club and Moffat Academy for their help in making their facilities available when necessary throughout the week.

The Men’s Open saw a top class final with Alan Macdonlad (Linlithgow ltc) beating Calum Gee (Giffnock Tennis club) in a match that was much closer than the score suggests. Both had fought their way to the final in what was an event full of very highly rated individuals.

Unfortunately, tournament regular Gary Smith (brother of Davis Cup Captain Leon Smith) was unable to regain the open singles crown he lost last year and was desperate to win back, having won on five previous occasions but was delighted to walk away with the honour of being the mixed doubles champion with partner Marie Berlouis.

Popular with the watching crowd were Moffatonians Ian Hutchison and his cousin Catriona Hutchison who both played brilliantly and were cheered on in a thrilling mixed doubles handicap final only to narrowly lose out to tournament regulars Lewis Hardcastle and Harriet Beattie.

Another of Beechgrove Tennis Club’s finest in action was Ella Paul with friend and Lochmaben Tennis club player Rhona Park. Both held their own for much of the Ladies Open Doubles match against the very strong pairing of Aimee Black (Western LTC) and Nikki Howie (Whitecraigs). 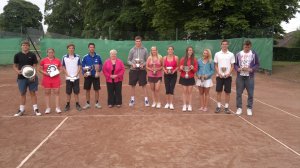 The organising committee would like to thanks all their sponsors, without whom none of this would be possible

The South of Scotland tennis championship concludes tomorrow (Sunday 4th) with the main event, the men’s singles final scheduled to start at 2pm. Play for the finals day is expected to start at 11am and hopefully the weather will be kind.

This years event has again attracted over 200 entries over all the events and with a little help from Dumfries Tennis Club on Thursday most of the events will be completed.

A big crowd is expected for the finals day so feel free to come along and support the event.

The Border Cup 2013 is scheduled to run on the weekend of the 24th & 25th of August at Nunholm. To enter this event please read the links below.

Entry into the Border Cups Tournament is reserved to players who were born in, live in or are members of a tennis club within The Borders or Dumfries & Galloway districts.