The second D&G Mini Red Tour competition took place at Annan on 20th February with 22 kids taking to the courts.

Over the 3 hours a total of 62 matches were completed with 6 girls and 16 boys competing for the top prize. Players from Seaforth Tennis Club in Annan, Beechgrove Tennis Club in Moffat, Dumfries Tennis Club and 3 players from Langholm taking part on the day. In the girls section we had an identical results from the previous event in Dumfries as Rose Brown  (BTC) defeated Keeley Scott (BTC) 10-4 in the final with Julia Janowska taking third place with a 10-5 win over Erin McCluskey (DTC). In the Consolation final Evie McKnight (DTC) won her second consolation final as she beat Hannah Salmon (BTC) 10-4.

In the girls leaderboard Rose leads the way with Keeley in second and Erin in Third.

In the boys event it was Daniel Palmer (BTC) who triumphed with a  10-5 win over Daniel McKenna (STC) in the final with Flynn Dalgliesh (STC) taking third spot with a 10-5 win over Jacob Holden (DTC). In the Consolation final Devon Jones (STC) beat fellow club player Thomas McCleary 10-1. 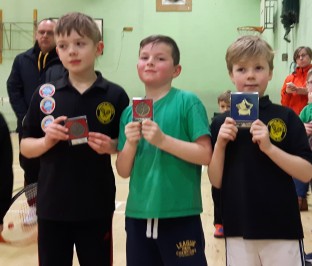 In the overall leaderboard Daniel Palmer takes over at the top with 165 points from Fergus Reynolds-Lewis, Jacob Holden and Daniel McKenna all joint  second 110.

The first D&G junior outdoor competition is scheduled for March 25th at Dumfries Tennis Club, this covers boys U12s, U14s and U16s events and should be payable online or on the day.

There is also a junior tournament in Carlisle in the first week of the Easter holidays, this competition covers from U8s to U18s for both boys and girls

Check the links for further information.

The results of last Sundays competition can be viewed using the link below.