The venue was the Loreburn Hall in Dumfries with the biggest entry ever for the Tour which this year is sponsored by Horizon Windows in Dumfries, big thanks to Alan and Alex for there support. There were 19 boys and 9 girls entered and we completed 78 matches in just over 3.5 hours. What a team.. 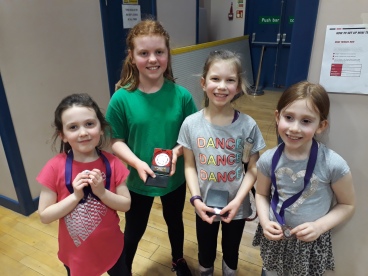 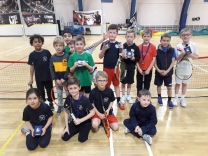 The parents and spectators were treated to some great tennis and effort from all the kids. In the girls event Lauren Gourley (Beechgrove Tennis Club) overturned her loss to Autumn Hodgins (Dumfries Tennis Club) in the round robin to take the final 10-3 as both girls played some brilliant points. In the 3rd & 4th Play-off Kathryn Wilson just edge past fellow Beechgrove player Grace Palmer 10-8. In the consolation girls final Eilidh Topping (Dumfries) bt Erin McKenna (Annan) 10-3 in a match which was closer than the score show.

In the large boys event we had 4 round robin groups followed by knock events. The 2 main semi finals had Dumfries Duo Logan McCluskey and Cameron Hunter taking on Carlisle pair of Declan Agnew and Jake Irving. Both matches had exhausting rallies as these matches ebbed and flow before the experienced Carlisle pair marched into the final. In the 3rd and 4th play-off Logan edge past Cameron 10-5. In the final, which was a re-run of the West Cumbria Mini Red Tour final on Saturday 27th, we had a reversal in fortunes as Declan overturned the Saturday defeat to take the match and tournament 10-5.

In a great consolation final we had Brodie Little (Annan Tennis Club) against Oliver McKnight (Beechgrove). These 2 boys in could quite easily be playing in the final next time as they produced a fast paced game which flowed from end to end. Brodie took the early advantage by going 3-1 up before Oliver edged past to go 6-5 before Brodie sealed it 8-6.

What a great event and to have 28 kids from D&G and Cumbria was great for tennis in this region.

The next event is on Saturday 24th February in Annan

Still a week or so to sign up for the upcoming level 1 tennis coaching assistant course. See below for details.

The LTA Level 1 Coach Assistant Qualification is the first step on the LTA Coaching Pathway. It is aimed at people looking to work as a coaching assistant at a club or parents who have a child who attends coaching. For further details and fees please see link.

Sports Scotland do offer a subsidy for this course subject to you applying before you start and then completing and passing the course.

Entries are now being accepted for the 1st of 3 Mini Red ball events in the 2018 D&G tour which is sponsored this year by Horizon Windows Dumfries.

There are 20 players signed up for the event on the 28th January with 7 day left to enter.

Use the link above to enter or drop an email to Michael at dumfriestennisclub@gmail.com

To add a Tennis event or competition in D&G to the D&G Tennis website or the Calendar then just drop an email Michael at dumfriestennisclub@gmail.com

Annan Tennis Club are running fun doubles tennis event on Saturday 27th January. The event is open to anyone, see details below. 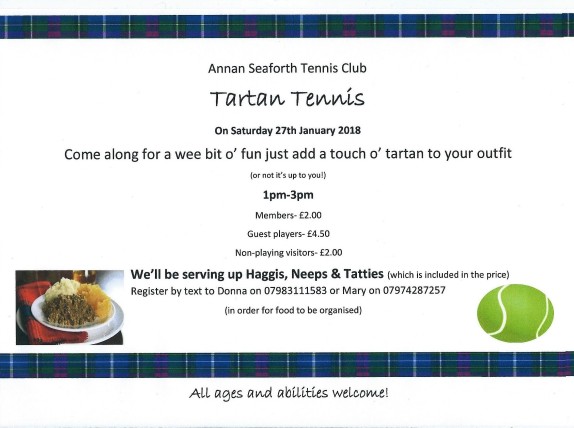 Dumfries Tennis Club is running a Green Ball event in the February school holiday. The event is scheduled for Monday 12th Feb with an 11am start. We are hoping to run both boys and girls events but this will be subject to numbers.

The event is open for entry from Monday 8th January, use the link below to enter online or drop Michael an email at dumfriestennisclub@gmail.com

The first leg of the D&G Mini Red tour is now open for entry. The first event will be held at the Loreburn Hall in Dumfries on Sunday 28th January.

To enter either drop and email to Michael at dumfriestennisclub@gmail.com or click on the link below and add your child to the event. Payment is on the day.