The Border Cups Tennis Tournament was completed over the weekend of the 20th and 21st August at Dumfries Tennis Club with 12 players competing in the singles and 8 pairs in the doubles over the 2 days. The event was again supported by Soltyre Ltd from Heathhall with DS Roofing Ltd sponsoring the match balls. Saturday’s play was disrupted by heavy rain with only 6 full matches being completed from the scheduled 10. In the first round of matches, which were played in between the rain showers, there were wins for Jason Grindall, Richie Cunningham, Kyle Singh and Michael Goldie. In the quarter finals defending champion Colin Dunbar used all his experience to comfortably beat Michael Goldie 6-0, 6-0 and likewise tournament favourite from the Border Robert Ainsley eased past Jason Grindall 6-2, 6-1. With both top seeds through the remaining 2 quarters were postponed until Sunday morning as the heavens opened again and flooded the courts. An early start on Sunday saw both the number 3 and 4 seeds tumble out the event. Richie Cunningham overcame Brain Litster 6-0, 5-7, 10-4 to secure his place in the semi and likewise Kyle Singh edged a tight match again Dan McKiddie taking the match 7-6, 4-6, 12-10. In the semi-finals both Robert and Colin eased past their opponents as Robert beat Kyle 6-1, 6-2 and Colin beat Richie 6-0, 6-0. Play then switched to the doubles, in the first round defending champions Colin and Jonny Short beat Jason and Kyle 6-0, 6-2, Brian Litster and Fraser Patterson beat brothers Lewis and Kyle Gilmour 6-2, 6-2, Dan and Lister Mckiddie edged past Richie Cunningham and Mike McMillin 4-6, 6-3, 10-6 and Borders duo of Robert Ainsley and Harris Brogan beat Martin Wilson and Michael Goldie 6-1, 6-1.

In the singles final we had the top 2 seeds with 3 times defending Colin Dunbar taking on favourite from the Borders Robert Ainsley. Colin looked in control as he raced into a 3-0 lead but that’s where it ended and Robert won the next 12 games to take the final 6-3, 6-0 and the trophy as it returned to the Borders for the first time in over 10 years, in the consolation final brothers Kyle and Lewis played an entertaining match with older brother Lewis edging past Kyle 6-4, 6-0. With Saturday’s rain delays there was no rest for the players with 3 doubles semi-finals starting straight after the singles final. In the main draw defending champions Colin and Jonny beat Brian and Fraser 6-3, 6-1 and Robert and Harris beat Lister and Dan 6-3, 6-4. In the consolation semi’s Richie and Mike beat Martin and Michael to set up a final against Lewis and Kyle Gilmour who received a walk-over after the other pair retired. In the consolation Richie and Mike used all their experience to beat Lewis and Kyle 6-0, 6-3. In the main final Robert and Harris got off to a great start as they took the first set against defending champions 6-1, however Colin and Jonny hung in and eventually edged the second set 7-6 which set up an final champions tie-break set which Colin and Jonny took control of early and eventually won 10-5 to regain their title and brink the competition to a close.

After the success of the D&G Mini Red Tour 2016 all 3 club from last year have agreed to continue with the tour for 2017. This is a great opportunity for all our young tennis players in the region to play fun but competitive tennis in a local environment.

The dates are to be confirmed with Dumfries hosting in January, Annan in February and finishing off in Moffat in March.

Watch this space for further details.

Start time to be confirmed once numbers are known but should be looking at 11am/12pm start and finish about 2pm/3pm subject to numbers.

As usual they will be needing helpers to score.

You will be able to enter online or by just emailing tennis@dumfriessportsclub.co.uk

To qualify for Red ball the child should have been born on or after 1st September 2007 but you can check by using the age group calculator below..

The 2016 championship came to a close over the weekend of the 30th and 31st July. With only one day totally washed out during the week it was a welcome relief to the organisers that all matches this year were played at the Beechgrove Tennis Club in Moffat.

On the Saturday in glorious sunshine 7 finals were played with the main show piece of the Men’s Open singles final being contested. The first final of the day was the boys 14s and under with Callum Caves (Giffnock) defeating Sammy Ralston (Linlithgow) 6-2,6-4.

In the 16s and under boys Jason Alexander (Cults) defeated Joshua Kean (Prestwick) 6-3, 6-0 and in the 18s and under boys Philip Blythe (Edinburgh) defeated Lewis Hall (Kinnoull) 6-4, 4-6, 10-3. The boys 16 and under doubles final saw to Cumbria boys take the title with Billy Blaydes completing a doubles as he and his young brother also won the 12 boys doubles. In the final Billy and James Hale defeated Robert Cowley (Wigan) and Joshua Kean (Prestwick) 6-4, 5-7, 10-6

The Men’s open final has 2 boys from the North of Scotland with 18 year old Vincent Gillespie who is ranked 58th in Britain, defeating  15 years old Ross Martin 6-4, 6-2. In the Mixed Doubles Philip Blythe and Heather Croll retained their title as the defeated Frankie & Lucia Rizza 6-0, 6-3 and Chad Lawson and Freya Paul 6-1, 6-0. Philip completed the hat trick as he and men’s doubles partner Daniel Gunn defeated Lewis Hall and Ross Martin 6-0, 6-4.

On the last Sunday we had 3 finals, local players and a brief shower! In the Men’s singles handicap event local boy Chad Lawson couldn’t continue his previous form, having won the Handicap Men’s doubles for the previous 3 years he lost in the final to Frankie Rizza (Edinburgh), going down 6-2, 6-4. In the 45+ men’s singles final we had two local guys competing for the trophy, Stephen White and Paul Boardman both from Dalbeattie competed on the slow blaes courts. Despite a good start and taking the first set 6-4 Stephen eventually ran out of steam as Paul pegged him back taking the 2nd set 7-6 (7-2 in the tie-break) then completing the win 6-3 to take the “Hanbidge & Howie” challenge cup. In the newly created  event of the 45+ men’s doubles, players played for the new “Magnox Cup” which was donated by long term supporter of the championship, Magnox Ltd based at Chaplecross near Annan. In this inaugural event we had four local players competing for the trophy. Geoff Legg (Castle Douglas) and Lister McKiddie (Dumfries) edged past the Dalbeattie duo of Paul and Stephen in a very tight match. Geoff and Lister took the first set 6-4 before Paul and Stephen levelled after winning the 2nd set on a tie-break 7-6(8) before Geoff and Lister won the champs tie-break. They raced at a 5-0 before Paul and Stephen got going again and eventually drew level at 9-9 before Geoff and Lister completed the win taking it 11-9. Despite the reduction in entries this year the level of tennis was still at the highest level. 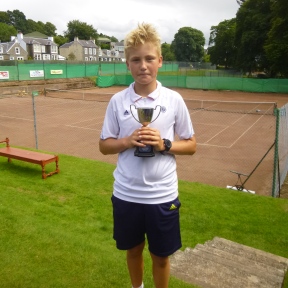 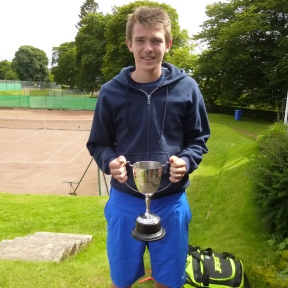 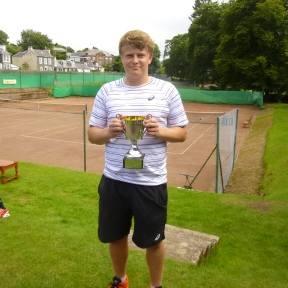 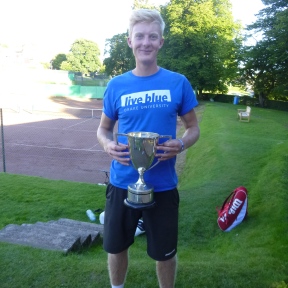 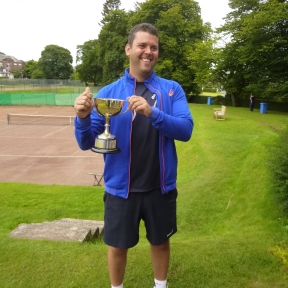