Dalbeattie Tennis Club are hosting their popular Lions Trophy on Sunday 22nd July. The start time is 1pm with the club providing refreshments on the day.

They will take entries now and up to Friday 20th. See poster for details.

With the summer school holidays fast approaching several clubs in the region are running summer camps during the holidays.

See the links below to book a slot online at these clubs or see the details on the poster below for the camps at Gretna. 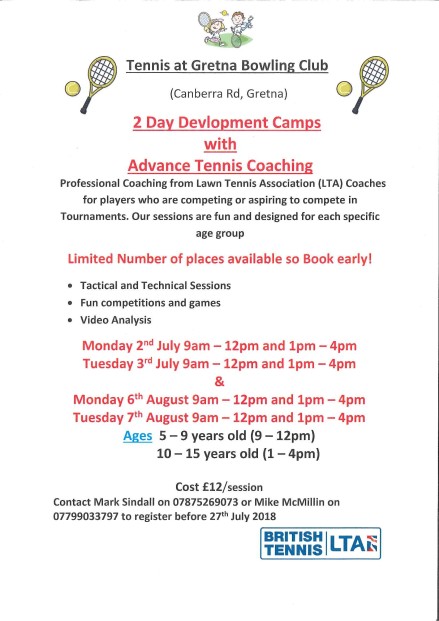 The Dan Maskell mixed doubles tournament attracted 10 strong couples from throughout the Region. The tournament based at Dalbeattie was played in glorious sunshine with the soaring temperatures taking its toll throughout the day. The format is a knock out with plate event for 1st match losers. Last year’s champions and number 1 seeds Colin Dunbar (Lockerbie) & Sophie Robinson (Dumfries) went through to the final without dropping a set. The other side of the draw featured last year’s runners up Paul Boardman & Maureen Johnstone (Dbt) seeded No 2. After a comfortable first round, the pairing of Darren Cassidy (Dbt) & Rhona Park (Lochmaben) stood in the way of another final appearance for the Dalbeattie duo. The semi produced some of the best tennis of the day with Darren & Rhona taking the first set 6-3. However, the experience of Paul & Mo shone through taking the second set 6-3. In the final 3rd set Paul and Mo dominated the play and saw out the tie despite a solid performance by their opponents.

The final, a repeat of last years was a closer affair than the previous encounter. The packed veranda was entertained to some thrilling tennis. Colin & Sophie took the first set comfortably only for Paul & Mo to come back strongly to take the second set 7-6. The final set again was a tight affair with both pairs looking for the break to give them the edge. It was Colin & Sophie who broke first then held their nerves to see out the final set 6-3 and take the title for the second year. President Keith Thom provided the vote of thanks to all and introduced Robin Charlton daughter of the late Dan Maskell to present the trophies. The club over the 2 days raised over £240 for the Dan Maskell Tennis Trust.

Dumfries Tennis Club hosted the 2018 Dumfries & Galloway Junior Confined Championship on Saturday 23rd June. The had 34 player from Dumfries TC, Beechgrove TC (Moffat), Dalbeattie TC, Gatehouse of Fleet TC, Annan Seaforth TC and St Mungo’s TC playing today as we completed 85 matches. We started at 10.30am with the 8s and under red and 10s and under green players and we finished with the 12 and under mixed final at 7pm. 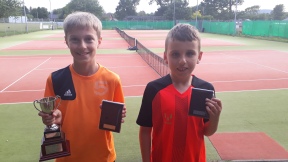 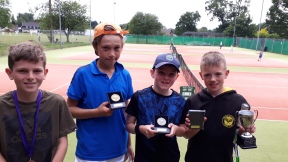 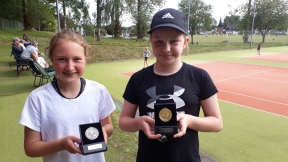 Great to see so many of D&G’s junior talent playing their best tennis on the big stage. Well done to all 34 kids. The next mini event is the D&G Red2Yellow Tour Green and Red event at Moffat on Saturday 30th June.

The date was the 22nd May 2013, that was the last time that Dumfries A lost a match in the D&G Men’s doubles league and back then it was against Stewartry CSC. Almost 5 years on and it happened again but this time it was Stewartry neighbours Dalbeattie who stopped the run. On an extremely difficult night for tennis where high winds and rain showers played there part, Dalbeattie Tennis Club and Beechgrove Tennis Club were the guests at Dumfries against Dumfries A and C. Dumfries A v Dalbeattie was a top of the table clash and in the other match Dumfries C v Beechgrove was a relegation battle. All four teams found the conditions extremely challenging and on paper Dumfries C were slight favourites against Beechgrove who have played all their matches away from Moffat this year as their courts are re-laid. Dumfries C took the first 2 rubbers as they managed the conditions better before Beechgrove found their rhythm. Dumfries took the first set in each of the 2nd round matches before Beechgrove secured the next set in each match, this took the result down to two match tie-breaks which in that wind could go anyway. However Dumfries C kept their nerve to secure both match tie-breaks and the match 4-0.

On the other 2 courts the first 2 matches were shared as both teams took a rubbers each with match tie-breaks. Dumfries A’s record was on the line and the match was going to the wire as Graeme Cross & Richie Cunningham took the first set 6-1 before Darren Cassidy and Paul Boardman levelled by taking the 2nd set 7-6 to take the rubber into the match tie-break. In the other match Oscar Alberigo and Stevie White took the first set 7-6 against Lister McKiddie and Chris Topping before completing the win by taking the second set 6-4. This brought the match down to the championship tie-break which went to the wire before Dalbeattie took it and the match 10-8 to secure a valuable win which takes them to the top of the league with one match remaining. Dalbeattie sit on 14 points after 9 matches with Dumfries A on 12 points after 7 matches. Dumfries A still remain favourites with their next match away to Stewartry CSC before a double header against bottom of the table Beechgrove. 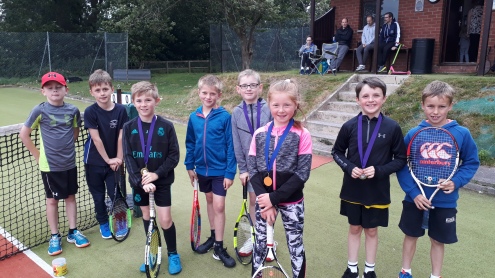 A field of 8 players battled it out on a damp cool day in Dumfries. We had 5 local kids, 2 from Edinburgh and Carlisle’s Jake.

We started with 2 round robin groups with Jake & Brodie Little coming through the B group and Oliver Clark (Edinburgh) and Cameron Hunter coming through group A. In the semi finals Jake edge past Cameron 8-6, 7-5 and Oliver won a marathon against Brodie 2-7, 7-2, 7-3 to join Jake in the final. Brodie secure 3rd place with a 7-3, 7-3 victory over Cameron before Jake edged another tight final as he took the gold medal with a 7-5, 8-6 over Oliver.

The next Orange event is scheduled for 28th July.

Dumfries and Galloway’s only representative in the 2018 Scottish Cup was Dumfries Men’s Tennis Team, who recently competed in the third round of the National Men’s Scottish Cup.   They played David Lloyd Aberdeen which is a very strong team, having won the Scottish Cup twice in the last four years.  The Dumfries Team comprised Lister McKiddie and Chris Topping, Les Harkness and Richie Cunningham and Graeme Cross and Lewis Gilmour.  On the day, Aberdeen proved too strong winning 5 – 1.  The pace of play was not what the Dumfries Team was used to and it took a set to get used to the pace and the second sets as a whole were closer.  The Dumfries Team however battled hard to the end of each match.   The Dumfries Team will now focus on the Dumfries and Galloway League with the benefit of this experience.  They are aiming to win the league for the eighth year in a row.

Dumfries Tennis Club would be delighted to hear from anyone interested in playing tennis and welcomes players of all ages and abilities. Coaching is available from qualified coaches.  For more information go onto the Dumfries Tennis Club website – https://clubspark.lta.org.uk/DumfriesTennisClub or email them at dumfriestennisclub@gmail.com

Welcome back to some old friends! Dumfries Tennis Club played host to the D&G Senior Tennis Championships with a couple of old D&G players returning for the event. In the singles we played through a mixture of weather as the showers came and went during the matches. The first 6 matches went the way of the ratings, with Stephen White (Dalbeattie TC) bt Steven McCracken (Dumfries TC) 6-1,6-3 and Kyle Singh (Dumfries TC) bt Darren Cassidy (Dalbeattie TC) 6-3, 7-5. In the quarter finals defending champion Colin Dunbar (Chatsworth TC) edge past Stephen White 6-3, 6-4, Brian Litster (Penrith TC) bt Chad Lawson (Lochmaben TC) 6-1, 6-1, Lewis Gilmour (Dumfries TC) bt Ian Barr (Dumfries TC) 6-1, 6-3 and Richie Cunningham bt Kyle Singh in a marathon match 6-1, 2-6, 10-6. In the semi’s Lewis won a tight match against Richie 7-6, 7-5 and Colin held off Brian 6-4, 6-2. In the final both players looked well jaded but Colin used all his experience to capture his 8th title in 10 years as he completed the win 6-1, 6-1. In the consolation final Steven bt Darren 6-4, 6-2. 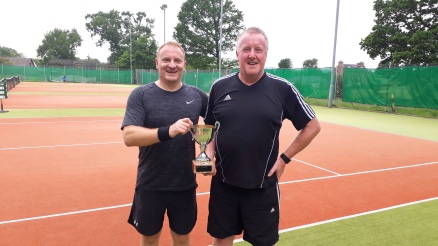 In the doubles on Sunday we had several tight matches in the 2 round robin groups with Brian and Fraser Patterson (Peebles TC) winning both qualifying matches against Lister McKiddie (Dumfries TC) and Chad 6-3, 6-2 and Graeme Cross & Michael Goldie (Both Dumfries TC) 6-1, 5-7 10-4. In the other group Stephen and Paul Boardman (Dalbeattie TC) edge past Colin & Lewis 7-6, 6-3 and Richie & Kyle 4-6, 6-2, 10-7.

The final saw 2 former Dalbeattie teams players and 2013 winners Brian and Fraser take on old team mates Stephen and Paul who were looking for their first D&G Doubles title. Brian who was chasing his 3rd title as he won back in 2016 with Richie Cunningham started well as he and partner Fraser took the first set 6-4 only to be pinned back as Stephen and Paul took the 2nd 6-1 and force a tie-break decider  which went the way of Brian and Fraser as they held on to take it 10-7.

There were 17 kids entered into the Red ball event which covers 8 years and under. After the 4 round robin groups were finished we had 5 Dumfries kids playing in the quarter finals. Logan McCluskey and Lewis Hutchings edged past fellow Dumfries duo Grant Kerr 10-6 & Cameron Hunter 10-9. In the all girls clash Hanna Augustynska (Edinburgh) bt D&G Red Tour champion Autumn Hodgins (Dumfries) 10-1. In the last quarter final Carlisle’s Jake Irving edge past Rex Castillo (Carlisle) 10-3. Logan bt Lewis 10-1 in the 1st semi with Jake bt Hanna 10-8 in the second. In the final Jake took the early advantage as he raced into a 6-0 lead before a brief fight back by Logan but Jake kept his nerve to win 10-4. In the consolation final Doncaster’s Finlay Jones edged a tight match against Annan’s Thomas McCleary 10-9. 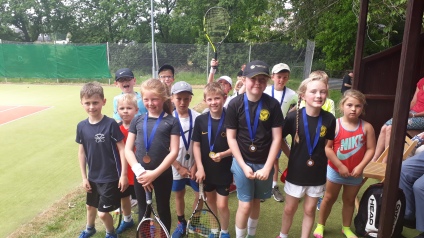 In the orange events we had 16 in the mixed and 4 in the girls event. Ellie Wright (Annan) completed 3 wins to take the girls event with Autumn Hodgins taking 2nd. In the mixed event only 3 local kids made it into the quarter finals . In the first semi Harrison McElnea (Lincoln) bt Edinburgh’s Oliver Clark 10-4. In the 2nd semi and a repeat of the Red final, we had the same outcome as Jake from Carlisle bt Logan 10-5. In a tight final Jake completed his double as he won 10-7 against Harrison. In the Consolation final Moffat’s Harry Brown won a marathon against Lewis Hutchings (Dumfries) 14-12.

In the green event which is 10s and under, Annan’s Daniel McKenna bt Moffat’s Ben Rogerson 4-1, 4-0 in the final with Eve Crombie (Dumfries) taking 3rd place with a 4-2, 4-2 victory over hitting partner Erin McCluskey. In the consolation event Euan Sharp (Dumfries) edge past Devon Jones (Annan) 4-2, 4-1 before losing to Jacob Holden (Dumfries) 4-1, 2-4, 10-7 in the final.