The October event will be run under the winter season and several players will be competing in an older age group for the first time. For some of these players the step up to a new age group will take time for them to find their feet and get back to winning ways.

The event is scheduled for Saturday 19th, to enter please use the link below.

To understand how the rating’s work please use the link below.

With only a handful of matches to be played both the 14s and 16s junior leagues are still up for grabs.

In the 14s and under Dalbeattie A, Dumfries and Lochmaben all sit joint top on 4 points with one game each to play. Dalbeattie C with 2 games in hand have 3 points and Beechgrove have 1 point with 3 matches to play and still have an outside chance.

In the 16s and under Lochmaben have a 100% record and sit top with 3 points with 3 games to go. Both Beechgrove and Dumfries have 2 points and 2 games to go and Dalbeattie have 1 point with 1 game left.

Dalbeattie A joined Kirkcudbright in regaining their titles. Dumfries A welcomed last years champions and top of the table Dalbeattie A to Dumfries last night (11th) knowing that a win was essential. Dan and Margaret (Dumfries) open up against Paul and Maureen (Dalbeattie) and after 2 tight sets 6-7, 7-5 it came down to the tie-break which Dalbeattie claimed 10-4. In the 2nd match of the night Lister and Sue (Dumfries) pulled the match level with a 6-2, 6-2 win over Stevie and Shona (Dalbeattie). Dumfries started the next 2 match well taking the opening set of each which Dan and Sue soon converted into a win over Paul and Shona 6-2, 6-2, this then left Dumfries chasing the last match to continue their league challenge but unfortunately it wasn’t to be as Stevie and Maureen took the second set 6-4, 2-6 against Lister and Margaret and eventually they took the tie-break 10-7 to secure the 2013 title. Last weekend Kirkcudbright had secured the B league with a home 4-0 win over Dumfries B.

Congratulation to both Dalbeattie A and Kirkcudbright for their achievements.

With one outstanding match to be played this weekend (15th) Kirkcudbright have regained the title they won last year. Although Stranraer can match the Kirkcudbright points total they will lose out on the match won total. Dumfries B were looking like contenders with 2 away games to go but defeats to Stranraer 3-1 and then Kirkcudbright 4-0 end their chances.

In the top league Dalbeattie A are in pole position with only 2 matches remaining. Dumfries A need to win both remaining ties with favorable match wins to stand any chance of winning the league after they lost to Dalbeattie on Monday’s rearranged tie. Dumfries have both matches scheduled this week (Wednesday & Thursday).

It was a case of third time lucky for the district junior championship. After cancelling the 14s, 16s and 18s twice before due to wind and rain, these events were eventually completed late August. The 10s boys, 12s mixed and 16s girls were all played in June.

In the girls 16s and under Rhona Park (Lochmaben) was victorious against Ella Paul (Beechgrove) in a high quality final with a final score of 6-4, 6-4 to Rhona.

As summer passed by and we headed into late August, at last some dry calm weather was the order of the day to get the final three events finished. The 14s and under boys was played under the Nunholm floodlights. After several years away from the tennis courts Alex Shearman (Lochmaben) returned to tennis the years and capped an excellent return with a winning performance against Lewis Gilmour (Beechgrove) 6-2 to claim the title.

This left both the 16s and 18s boys titles which were completed on the final weekend of August. In the 16s final Stuart Balfour (Dumfries), defending champion took on Lewis Gilmour who was in his second district final. Unfortunately for Lewis the outcome was the same and although the score was one-sided at 6-1 the match was far from it with many games producing 10 shot plus rallies but in the end Stuarts patient game won through. 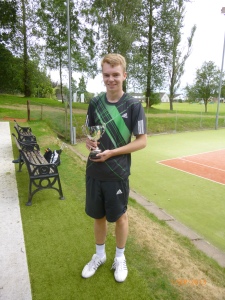 In the 18s the 1st and 2nd seed made the final and served up a very good match. Chad Lawson (Lochmaben) who has had a good season winning 5 local events, was up against defending champion Duncan Muir (Dumfries) who was playing in his 100th LTA rating event.  The first game of the final proved decisive as both player gave it all but Duncan took the advantage by breaking Chad’s serve to race to a 2-0 lead and from that he held on to take the 1st set  6-3. In the second Duncan’s experience was vital as he took the final set 6-2 to claim his last D&G junior title before stepping up into the senior game.

The mixed leagues are close to their finish with both leagues still up for grabs.

Dalbeattie A have taken the advantage in the A league with a home victory 4-0 over a young Moffat team who has 3 junior players in their line-up and Moffat also lost out to Stewartry CSC 3-1. This week see’s Beechgrove finish their campaign away to Dumfries A whilst Dalbeattie travel through to Castle Douglas to play Stewartry CSC.

All results and fixtures can be viewed using the link below.

The 2013 Border Cups were recently hosted by Dumfries Tennis Club over the weekend of 24th & 25th. The tournament is open to Border and D&G players and this year saw a health turnout from both districts and the sun also made a welcome appearance. On Saturday the men’s singles took place with 8 D&G players and 3 from the Borders. After some brilliant matches Colin Dunbar took on Kevin Breen who won the event last year. After a one-sided first set which Colin took 6-0 Kevin step up and presented more of a challenge but after a few tight games which went Colin’s way, Colin then saw out the match 6-3 to claim back to back titles after winning the D&G Confined earlier this year. 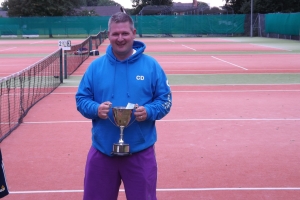 The Sunday saw another good entry for the gents doubles with 7 players from the Borders travelling over and 13 D&G players making up the numbers.

After a couple of qualifying matches the quarter finals got under way. Lister and Dan McKiddie (D&G) just edging out Border pair of Adrian Moir and Simon Hammond 6-3, 7-5 in the all D&G clash Stephen White and Paul Boardman recovered from a set down to just edge a championship tie-break against Dumfries pair Graeme Cross and Martin Wilson 5-7, 6-1, 13-11. Returning duo of Fraser Patterson and Brain Lister who both played for Dalbeattie but now reside out with D&G took on another Borders pair of Glen Gordon and Jonathan Adamson. The first set was tight with Brian and Fraser just edging it 6-3 but in the second the D&G Confined holders showed their class and took the second 6-0. The last quarter final saw Current singles champion Colin Dunbar pair up with Borders favourite and previous winner and organiser of this event Johnny Short. They faced Annan pair Michael and Malcolm McEwen who despite their best efforts were no match for the experience pair who eventually ran out 6-0, 6-1 winners.

The semi final results saw Colin & Johnny win 6-2, 6-3 against Stephen & Paul and in a repeat of the D&G Confined final Brian and Fraser won a tight match 6-7, 7-6 and 10-8 in the championship tie-break against Dan & Lister. In the final Colin and Johnny edged past Brian and Fraser 6-4, 6-2. In the consolation final an all Dumfries clash saw Martin Wilson and Graeme Cross just edge past Richard Cunningham and Kyle Singh 6-2, 3-6 and 10-8 in the tie-break. The committee wish to thank Soltyre Ltd for the continued support of this event.