The South of Scotland over 45’s tennis team has finished second in League Division Three in the British Leagues, thereby gaining promotion.  South of Scotland comprises of Dumfries and Galloway, Borders and Ayrshire.  This years team had players from Dumfries and Galloway and Ayrshire.  Local players, Fraser Patterson of Dalbeattie and Lister McKiddie of Dumfries Tennis Club took part.  The team lost only one match against a strong Warwickshire side who were unbeaten. Otherwise, the team beat Lincolnshire 10-0, Bedfordshire 8-2, Cheshire 8-2 and Cleveland 8-2.  The team looks forward to competing in League Division 2 next year in what will be an extremely high standard. 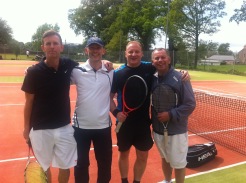